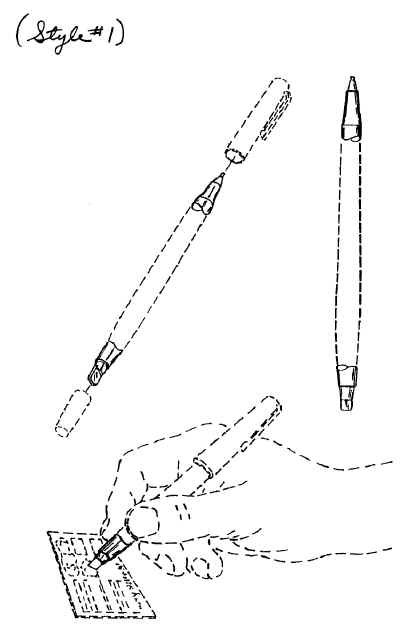 Just about everyone uses a ball point pen. And "Lottery Mate" -- also known as the "Scratcher Pen," offers a special attractiveness, use and convenience for everyone. The "Scratcher Pen" consists of a regular ball point pen with an added special feature -- a metal tip at the opposite end, which is used to scratch off all types of "Scratchers" instant lottery tickets. The ball point end is used for marking number selections on your lottery game cards. The basic concept is:  One pen is all you need!

Nearly everyone plays some form of lottery game, such as the "Scratchers" instant game tickets, and additional varieties of instant scratcher tickets are being made available all the time. Some game cards are quite large and, as a result, require a lot of scratching.

The "Scratcher Pen" is great for the everyday use of a ball point pen because of its discreet style. Two styles are shown above. Style # 1 depicts an upper grade, executive-style ball point pen. Style # 2 is a less expensive ball point pen. Both pens have protective caps on them.

The "Scratcher Pen" also has an added feature that could interest hobbyists or souvenir collectors, as shown in Style # 2. The state name can be imprinted on the pen, according to the state in which the pen is being sold. Collectors may want to collect pens from each of states in which lottery tickets are sold. "Scratcher Pen," -- also known as the "Lottery Mate," makes for an attractive and easy-to-display impulse item at the checkout counter of any convenience store which sells lottery tickets.

Prototypes work very well. The "Scratcher Pen" would prove to be a very attractive, useful and convenient addition to the market.