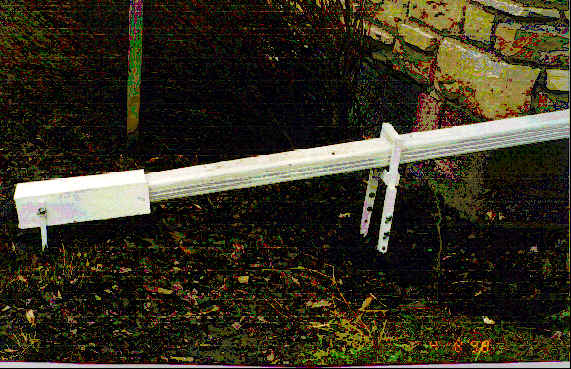 When the down spout extension is bumped by a child or brushed by a dog, subjected to strong winds, etc., it falls off and becomes useless. All roof water will now be directed to the home's foundation, creating the potential for basement flooding. The gutter/down spout system is designed to carry water away from the house, not to the foundation.

The guard is made of a material strong enough to withstand the stepping weight of an adult, wheels of heavy lawn equipment, and whatever crushing weight may befall it. The anchoring is achieved by inserting the two shafts that swivel and are attached to the guard into the ground until the guard makes contact.

Installation is quite easy. Simply lift the down spout extension and slide the guard over the down spout and then insert the shafts into the surface. When mowing, lift up the guard and down spout several inches and mow under.

When down spout extensions are extra long, there is a danger of bending near the center. This collapse can occur when a weight or pressure is exerted near the center – a child's weight, snow, or any falling object. A model with a slightly different configuration will solve this problem. It can be used alone or in combination with the guard. The legs (shafts) are longer and the guard that wraps around the down spout will be the same width as the legs. A sliding clamp will give support under the down spout. A model with a sleeve-type guard would also be possible.  This invention offers much potential. It is inexpensive to manufacture and a tremendous market exists.